Dan Hurley has written hundreds of science articles in the past two decades, for such outlets as the New York Times, the Washington Post, Wired, Discover, Psychology Today and Neurology Today. Here are two dozen of them…

“Grandma’s Experiences Leave a Mark on Your Genes.”

Your ancestors’ lousy childhoods or excellent adventures might change your personality, bequeathing anxiety or resilience by altering the epigenetic expressions of genes in the brain.

“The Enduring Importance of Neighborhoods.”

A sense of trust is key to making urban neighborhoods thrive.

“Robotic Pancreas: One Man’s Quest to Put Millions of Diabetics on Autopilot.”

Jeffrey Brewer was on top of the world. For years he had put in 100-hour workweeks as cofounder of two early Internet juggernauts: local guide Citysearch and the online advertising pioneer GoTo.com (later renamed Overture). But by 2001, with more than enough money to live on for the rest of his life, the 32-year-old handed off control of Overture and set out on a yearlong trip to Australia with his wife and two kids. Upon their return to the States, though, they noticed something odd. Seven-year-old Sean was unquenchably thirsty and urinating far more often than usual.

“The Science of Sarcasm: Not That You Care.”

There was nothing very interesting in Katherine P. Rankin’s study of sarcasm — at least, nothing worth your important time. All she did was use an M.R.I. to find the place in the brain where the ability to detect sarcasm resides. But then, you probably already knew it was in the right parahippocampal gyrus.

IN the back room of a suburban storefront previously occupied by a yoga studio, Nick Vecchiarello, a 16-year-old from Glen Ridge, N.J., sits at a desk across from Kathryn Duch, a recent college graduate who wears a black shirt emblazoned with the words “Brain Trainer.” Spread out on the desk are a dozen playing cards showing symbols of varying colors, shapes and sizes. Nick stares down, searching for three cards whose symbols match.

Among the growing numbers of researchers and public health officials advocating a daring new strategy to put an injectable antidote for heroin overdoses directly into the hands of addicts, few have the credibility of Mark Kinzly.

“Down syndrome researchers see hope for a pill to boost patients’ mental abilities.”

New studies are raising the hope of finding a pill to improve the intellectual abilities of people with Down syndrome.

ATLANTA — Standing before a row of enlarged photographic slides of deadly viruses like Ebola and Hantavirus that decorate the new lunchroom at his office, Dr. Sherif Zaki professed himself to be uplifted.

“The Beep of the Sensor, the Thrill of Control.”

On Cape Cod for a two-week vacation last August, I went to sleep one night and almost never woke up. An insulin-dependent diabetic, I had developed such a severe low-blood-sugar level that my 9-year-old daughter, Annie, found me unresponsive and soaked in sweat in the morning.

“Can You Make Yourself Smarter?”

Early on a drab afternoon in January, a dozen third graders from the working-class suburb of Chicago Heights, Ill., burst into the Mac Lab on the ground floor of Washington-McKinley School in a blur of blue pants, blue vests and white shirts.

They called it a  myth as fantastical  as the unicorn,  but scientists have  now found the engram,  the physical trace  of memory in the brain.

“Doctors Give Hope to Patients With Long Histories of Unexplained Symptoms.”

People with a long history of medically unexplained symptoms — aches, pains, fatigue, dizziness and other complaints for which doctors can find no physical cause — might finally find relief.

Neurologists received holiday news reports of a coma patient whose awakening was trumpeted as a “miracle” with mixed emotions.

“Bizarre and Infamous Join Scholarship in an Archive of Psychology.”

There’s a “second brain” in your stomach. It influences your mood, what you eat, the kinds of diseases you get, as well as the decisions you make. And you thought it was all in your head!

”How you doing, Tom?” asked Dr. Anthony DiBiase, a Manhattan surgeon, in the midst of jabbing a lancet 1,130 times into the balding head of Tom Raybek. ”You O.K.?’

“A Drug for Down Syndrome.”

Early in the evening of June 25, 1995, hours after the birth of his first and only child, the course of Dr. Alberto Costa’s life and work took an abrupt turn.

“A New Suspect in the Obesity Epidemic: Our Brains.”

The urge to eat too much is wired into our heads, in several complicated and overlapping ways. Tackling obesity may require bypassing the stomach and short-circuiting our brains.

“Child’s Plague: Inside the Boom in Childhood Diabetes.”

A decade ago juvenile diabetes was rare. A controversial new theory may reveal what causes the disease—and how to keep the incidence from going still higher.

Investigates the illness schizophrenia. The deinstitutionalization movement; National Alliance for the Mentally Ill (NAMI) study; Numbers of schizophrenics on the streets; The case of Mark Sallee and others; Schizophrenic thinking. INSET: Treating schizophrenia, by D.H.; The search for model treatment.

Smarter, The New Science of Building Brain Power
For over a century, IQ scores have been viewed by scientists as placing an upper limit on what a person can ever achieve: a cognitive glass ceiling, a number tattooed on the soul. That dogma was shattered in 2008 with the publication of a major study showing that “fluid intelligence”—the ability to learn, solve novel problems, and get to the heart of things—can be significantly increased through training. But are the claims now coming from the flourishing brain-training industry really just a bunch of happy talk?

Expanding upon one of the most-read New York Times Magazine features of 2012, SMARTER penetrates the hot new field of intelligence training to reveal what some researchers call a revolution in human intellectual
abilities-and others insist is bogus baloney. To sort fact from self-help drivel, Dan met with over 200 leading scientists. But refusing to take researchers’ word for it, Dan offered himself up as a human guinea pig, road-testing commercial brain-training programs, learning to play the Renaissance lute, joining an intense “boot camp” exercise class, attempting mindfulness meditation, and even undergoing transcranial direct-current stimulation (also known as getting his brain zapped). By the book’s end, readers learn whether his efforts made him any smarter. (Spoiler alert: his score on the gold-standard test known as the Raven’s progressive matrices increased by 16%.)

Taking on the defenders of the old faith that IQ is forever, including those who cite it in support of racist cant, Dan
chronicles top-level scientific meetings, including some convened by high-security military funders, where debates go from fierce to downright ugly.

SMARTER also goes after those who claim that intelligence doesn’t matter. Writers like Malcolm Gladwell (Outliers), Daniel Goleman (Emotional Intelligence) and Paul Tough (How Children Succeed) have made the case that IQ pales in importance to hard work, grit, and emotional poise. As Dan writes: “Certainly IQ is not everything; perhaps it’s not even the most important thing, but it’s definitely one of them. It’s not the only reason, but it’s one of the reasons that Warren Buffett, Mark Zuckerberg, and Bill Gates are richer than you are. (Both Zuckerberg, who
founded Facebook, and Sergey Brin, who cofounded Google, were selected in adolescence, in part on the basis of scoring high on standardized tests, to attend the Center for Talented Youth at Johns Hopkins, as was Stefani Joanne Angelina Germanotta, better known as Lady Gaga.) It’s how Malcolm Gladwell, Daniel Goleman, and Paul Tough wrote such awesome books. Because they’re smart, and because, as politically incorrect as it has become in polite society to say so, intelligence still matters.”

Certain to be debated, impossible to be ignored, SMARTER chronicles the startling transformation in our understanding of a fundamental human trait: the capacity for rational thought—the ability to learn—and whether a strict limit is set for each of us on the day of our birth, or whether we can do something about it. 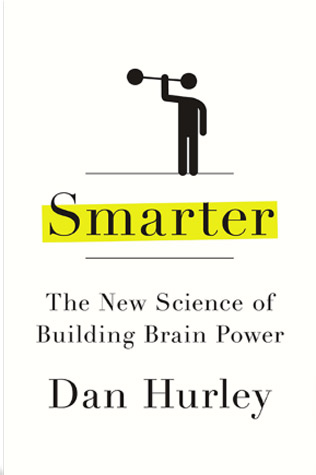 Find it on Amazon
